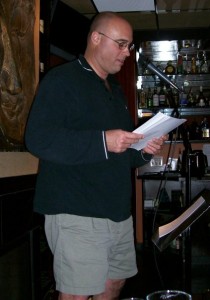 Poet, waterman, rock climber, and photographer, Larry Keuchlin lives close enough to the ocean that sea lions or a big swell wakes him up, along the world famous Sunset Cliffs of San Diego, California with his overly-possessive cat, Pogo. Larry Kuechlin was born in San Pedro, California lives in Ocean Beach (San Diego), California. Larry is a mentor, friend and supporter of many modern poets and is the author of three poetry publications as well as an award winning literary author. All of his accomplishments and publications are listed below.

Along a Ruined Sea, Special Edition, Avalon Press 2009 to present

(Nominated for the Tufts Discovery Award)

(Nominated for the Pushcart Poetry Prize)

Something Still Visible In the Fire, Alabaster & Mercury, August 2011

(Nominated for the Pushcart Poetry Prize and the Tufts Poetry Award)

Editor for 9 volumes of poetry

Moderator of a writing group; 2007 to present.

Published in Rock and Ice Magazine

The sidewalks in Dallas were my favorite.

The ants there are compassionate, or at least their sting didn’t penetrate my exhaustion. Not like Amarillo. Fuck. Those ants sting hotter than a Texas sun burns. No matter how sick, how delirious…how drunk, I never slept in Amarillo. Not a minute.

I’d been sick since June. Ear infections antibiotics couldn’t touch. After the fires and the hottest, most humid summer in decades, my health was destroyed. I took this job as a last, dying hope. They called it a recession…but California’s economy didn’t recede…

It seemed like a good idea; up in a box seat at the Roxy, next to Don Johnson and some bit of fluff…severe make-up and tightly bulging dress. She looked almost 20. Talked on her cell phone through the entire Bob Dylan concert. He never looked at her. She was arm candy; nothing more. He was too excited about Bob Dylan to notice something like an actual person…and she obviously didn’t give a shit about him. He was 5 years past being somebody. That’s forever in Hollywood.

Me…I couldn’t concentrate long enough to hear the music. My infections were worse at night…I had to work hard to take all of this in. Life is so fucking surreal when you’re that sick.

So…whaddya think? Will you do it?

What the hell…why not? It’s not really like I had a choice.

I was going to build the first mobile climbing wall and take it on tour around the country. A friend of mine who I put up first ascents with got the gig. He was no craftsman, though, and he needed me to actually build it. So I did. It was going be a real climbing wall…not like the cheesy things they have now. I already made hand holds and shipped them all over the world. I knew I could do this. The money they were offering was staggering, and I was so broke, anything sounded good.

It was a last chance to keep my life.

I finished the wall on a 105 degree day in Claremont. I passed out in the heat and smog. They found my body strewn among the metals studs; tool pouches spilling self-tapping screws and clamps. My father threw water on me and drove me home. I barely made it into the air conditioned house.

Get ready. We have to go to the engagement party.

I’m too sick to go, sweetie. You go. I need to stay home and rest.

This did not sit well. I guess I had been sick too often for her tastes and this particular engagement party was very important. Very. I barely knew the guy.

She, apparently, knew him very well.

He was an old boyfriend of hers from High School marrying some “bitch” from Georgia. The girl seemed nice to me, but what did I know? I only met her once, but she laughed easily and was beautiful in a way that only Southern women can be. She was delightful.

How can you be so selfish? I swear if you don’t go to this I am through with you!

I looked at her in disbelief. She was standing on the staircase with a packed bag. I had a temperature of 102. I was so delirious I couldn’t walk, let alone drive.

I showered up and went. I don’t remember anything about the evening at all.

That seemed like a decade ago, here on the sidewalk in the “artistic” section of Dallas with the friendly ants. I tried to stand, but faltered. I looked drunk, but I honestly hadn’t had anything to drink in over 2 hours. I was probably sober.

I looked at my watch, and then remembered. Yeah, about that. It went MIA in Houston. They don’t have ants in Houston. My bus broke down and I had no place to go. By the time we got the wall taken down and packed away, all the spots were taken. I sat in an underground parking lot at the Astro Dome and cried Somebody jacked the watch when I fell asleep. The lead singer of L7 finally took pity on me and put me on their bus. I slept on and off on the 8 hour drive to Dallas on the steps of their bus.

It didn’t really matter what time it was. There wasn’t going to be breakfast this morning. There wasn’t enough money in the Tour for food anymore. We were sponsored by a micro brew, though, so there was always plenty of beer. Just no food.

I took out my wallet. At least that was still there. The two $100 bills that I had stashed away for emergencies had dwindled down to 7 quarters. The Promoters had missed every payday so far, and I was flat broke. I never made the dinner provided by the venues. I worked too long on the wall. The Tour couldn’t afford enough roadies, so my partner and I did the work of 8 men by ourselves. Usually.

Angie Walton used to help. She of Daily Bread fame. When she wasn’t flirting with Bradley of Sublime. That was during his “Clean” phase when he wasn’t doing drugs or cheating on his wife, according to the biography on VH1. Would it be improper of me to say that they were smoking pot and fucking?

Tony Hawk even helped once. I was blown away. He told me he was in awe of how brave climbers were.

I had a hard time digesting that.

I had just seen him deck off a 20 foot, back-side air. I mean, Tony Hawk missed the ramp entirely and hit the deck…and bounced back up in the air at least 3 feet. He broke 2 ribs and didn’t skate for about a week.

He got back up and waved at the screaming fans. He wouldn’t let anybody help him until he got inside the bus. It’s the ethic of the skater: you ALWAYS get back up. No matter how much it hurts. I liked that. I adopted it as my own. And now I was standing here with this legend, an extreme sport hero, Tony Hawk, and he was telling me I was brave.

It was one of the proudest moments of my life.

I made my way down to a 7-Eleven. The air was cool inside, but the clerk was already looking at me crosswise. I got to the deli. The sandwiches were too much, and no matter how drunk I was, they always seemed a bit dicey.

A foot of pure lard and something brown and spicy not meant for human consumption. I felt safe with them, though, because you nuked them. Nothing could survive that. If you were lucky the clerk wouldn’t notice you dumping nacho cheese on it as you left.

I had eaten a lot of these over the past month. I ate whatever gas stations and truck stops had to offer since I never made it to dinner on time. I’m sure that added to my deteriorating health.

I walked outside. My stomach was howling. I leaned up against the stucco and collected myself as best I could.

Excuse me, can you spare 50 cents? I really need to eat.

I guess I looked pathetic enough. It only took twelve tries.

I walked back into the store. Felt the cool air on my skin. Smelled the stale coffee against the scent of cardboard. And there it was. Another meal.

I took out my wallet to get the final 7 quarters, and looked at the last thing in my wallet worth anything:

Brandee and Courtney in the backyard. Blissful. Digging a hole to China, Daddy, to China. Itty Bit with a plastic shovel and a wild-eyed smile on her face. Brandee with her favorite green dress on…the color her Daddy loved the most. Beautiful and happy.

I walked out and dropped the quarters into a payphone.

Hello. Larry is not here. He’s gone right now. Larry, if this is you, I’ve taken the kids to my mothers. I’m leaving you.

I walked back to the compassionate ants and laid back down. The sun was high in a burning sky. I didn’t feel anything. I wasn’t even hungry any more.

I tried to go back to sleep

if I could sleep,

if I could just sleep

if my eyes would close,

and my mind would stop

and I could really sleep

then this didn’t happen, none of it

and I could get home

and my job would still be there

and my girls would be laughing in the backyard

and I would hold them

I woke up among the ants.

I had a large bag of Doritos on my chest. And a post-it note on my access badge:

Larry, you look like you can use these more than we can. Hope things get better.

They actually took the time to look at my name.

I walked to the van and grabbed two pint bottles of Black Dog Ale and ate the Doritos for breakfast. The Tour always had plenty of beer, and I always wanted to be drunk.

I rubbed my eyes and walked slowly back into the heat and reality.

You always get back up.

Part of Along a Ruined Sea, by d/e/a/d/b/e/a/t/ Publishing