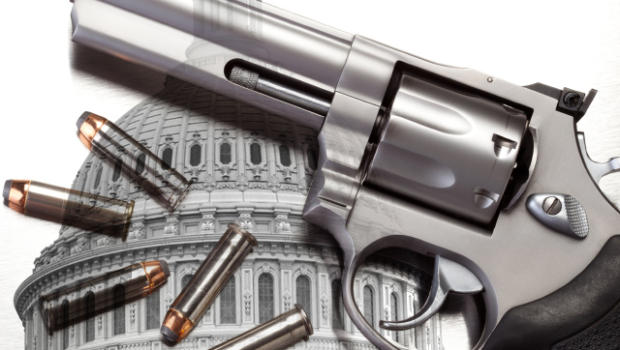 … on our Second Amendment.

No doubt you all know about the tragic attack on the Sandy Hook Elementary School in Connecticut. None of you will hear me say that this was not a horrific, gut-wrenching attempt. I will, however, say that trying to take away or reduce our right to bear arms is not the right thing to do. School shootings have become, unfortunately, more and more commonplace; with the first being the shooting carried out by Eric Houston at Lindhurst High School, located right here in my area. Since then, many others have taken place. However, this is the first time I can recall hearing the noise being made by mostly Democrats, screaming for gun control. My own state’s Dianne Feinstein (Democrat-Senator) is one of the leaders of the charge. It is angering me enough to regret ever voting for the woman.

As someone who has lost a loved one because of a shooting (my older brother was murdered in 1989), I can honestly say I can empathize and sympathize with the victim’s families; and not just the Sandy Hook children. I know only all to well that that sort of pain is ever abiding. Again, I say that taking away our right to bear arms and thus violate the Second Amendment is not the answer. At the risk of sounding cliché, look at the ongoing War on Drugs. This war has been going on for many years now. Despite efforts to eradicate or slow down the use and sell of illicit drugs, it has not worked as well as people have hoped. These addicts will still find a way to get their fix, and, in their probable state of mind,  they’re saying, “to hell with the laws.” One could say the same about guns. If a criminal wants one badly enough, he or she will get it. I do not get why some politicians (cough cough, Obama) finds that fact so hard to understand. Now, if the laws designed to crackdown on drugs aren’t really working (at least, not here in California), what makes them think a criminal is going to abide by the gun laws? Chances are that they will not be stopped from acquiring a gun. There is something else I am wondering if these dummies have taken into consideration: one could nearly always borrow a gun from a friend and use it to shoot someone. In the case of my brother being murdered, his killer had borrowed a gun from his uncle, saying he had target practice to do. See how easy it is?

Which brings me to my next point: why are my fellow law-abiding citizens being punished for the stupidity of others? Why should we not be able to legally purchase and use a gun because of others’ actions? There are many of us who would not use our guns in a malicious fashion  unless we absolutely have to! Especially when guns are becoming more and more of a necessity to defend one’s home and family. I, for one, would feel much safer if I had a gun that I have been thoroughly trained with at my side (I live in a crappy area). Now, speaking of home protection, here is a quote that was originally attributed to Senator Feinstein: “When the gunman realizes that nobody else is armed, he will lay down his weapons and turn himself in… that’s just human nature.” This comment was made by a Senate Communication Intern. When I first heard about that quote, I swear I thought I was going to have my vision and hearing checked. I couldn’t believe anyone would actually say that! But then again, they are politicians, and we all know that not all of them are among the sharpest tools in the shed. Yes, this includes interns. Ask yourselves this question: do any of you really think that this statement is true? I’m willing to bet that you don’t. The naivety of this staffer is astonishing. If anything, the realization that no one is armed will give the scum even more of a physical advantage, and to me, more of a psychological advantage. The knowledge that his or her victims have do not have anything in which to defend themselves with… well, they are more or less the “perfect victim.”

I ask you all to consider this. The bigger the city, the slower the average officer response time may be. It is not just big cities that have that problem, it can obviously happen in smaller cities or towns. By the time the cops get to where you are to help you, it may already be too late. If you are prepared, you can (hopefully) stop an intruder in their tracks. For instance, if you have a 9mm gun, and a light load, that bullet will travel at 1100+ feet per second. Much quicker than trying to wait for law enforcement to show up and arrest the scum.

I am also quite disgusted that Obama is using a tragedy to trample upon our Constitutional rights. I have heard about people here in California using the Dorner tragedy as an excuse to force more gun control laws down our collective throat. Did any of  you see the picture of Obama holding and aiming a rifle? I can’t help but think that it is a bit (okay, okay, more than a bit) ironic that while he’s screaming for gun control, yet he is dependent on people who carry arms to make sure him and his family are safe? Feinstein has the same protection. I don’t know about you guys, but I find that hypocrisy rather maddening. Given the above scenarios, I think it’s pretty obvious that more gun laws aren’t exactly the route we should take.  If anything, more stringent safety regulations need to be implanted, especially in schools. Tighter security and an effective means of communication is one place to start.

I will close with this: if people still want to continue on with the delusion that guns are simply to dangerous, we may as well start banning the many things that can also be a lethal weapon: baseball bats, hammers, crowbars, etc. Virtually everything can be used to injure, maim or kill someone. Remember it is not the weapon itself that decides it is going to be used with intent to commit a violent crime. Trying to say guns people is like someone saying their spoons made them fat because they used it to eat too much ice cream!  It is the owners who make that decision; and now I will leave you with one of my favorite sayings: “it is better to be judged by twelve than carried by six (source unknown).”