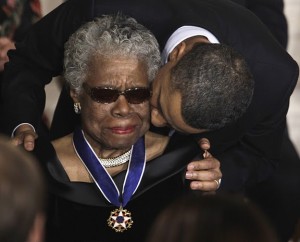 When one thinks of the inspiration that is Maya Angelou, it is hard not to think of the unbelievable feeling and emotion that her words delivered. She is known for her poetry and her spirit and known she is sharing the inspiration behind her influence. In an interview for “This Week” posted by ABC News on November 24, Angelou opens up about her mother as she reads a passage from her new autobiography “Mom & Me & Mom”.

The emotion poured out from eyes and soul of Angelou as she read aloud a chosen passage to ABC’s Susan Saulny.

“There has never been anyone greater than you as the mother of a young adult. She squeezed my hand twice.”

From there Angelou, who just last Wednesday was awarded with the Literary Award for Outstanding Service to the American Literary Community at the National Book Awards, said she couldn’t read any more.

She described her mother as a “butterfly” and attributed her to her success as she helped a young Angelou realize her potential.

“She was so beautiful. My brother and I, we would watcher her carefully, as if she was a butterfly.”

This is the first time Maya Angelou has opened up about the highs and lows of her relationship with her mother. It was a relationship that fueled her ambition and gave her the great gift of “forgiveness”.

As she reflected about her own hope and vision of a better tomorrow, she looked back at the greatest message her mother taught and instilled in her.

“Forgiveness is the greatest gift you can give yourself. It’s not for the other person. You must forgive. It’s for your own sake. To rid yourself of that weight…That’s the answer.”

As a woman, a poet, an author and a civil rights activists, Maya Angelou has taken the memories of her mother and turned them into words enriched with the everlasting emotion of love, hope and courage.

About the Author
Tarringo Vaughan

Tarringo T. Vaughan always believed he had a love affair with literature. One of the first pictures he saw of himself was of him at maybe the age of three or four year’s old sitting with a book in his hand. But for Tarringo, growing up in the depths of the inner city both in Boston, MA and Springfield, MA made him believe that expression through the literary voice was un-cool and unattainable. As a very quiet and shy child he learned it became very valuable in his self expression. Born in 1976, Tarringo was the first child, grandchild and nephew in a family that had grown accustomed to struggle. His mother was a teenager who quickly lost the support of my father who today he knows very little of. These aspects of his life triggered the inspiration of his pen. Tarringo is the publisher of two poetry books. "Beyond Rainbows & Yellow Brick Roads" and "A Crack In The Sidewalk." Purchase information or to find more of his work visit http://www.tarringovaughan.net. Tarringo is also a writer at Examiner.com.