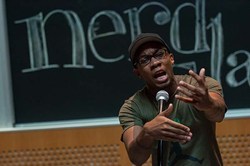 Boston, MA (PRWEB) July 26, 2013In a few short weeks the National Poetry Slam will return to Boston, Cambridge and Somerville, and the full schedule is now available. Seventy-two teams of some of the best performance poets from around the country will come to compete in a week-long tournament and festival. They will perform their own original work in the hopes of impressing five randomly selected members of the audience each night. The competition will kick off on Aug. 13 and run every day through Aug. 17 at venues around the city.Boston last hosted the event in 2011, in what was the most well-attended National Poetry Slam in history. Few cities have ever hosted the event twice, much less within a three-year span, but the sell-out crowds that greeted NPS 2011 made a return inevitable. “We’ve just never seen anything like 2011 in the history of slam,” says Host City Director Simone Beaubien. “We had people standing in lines around the block for an hour in the rain to see poetry.”The complete schedule for this year’s festival is now available at nationalpoetryslam.com. A total of 15 venues will be hosting events this year, scattered across Central Square, Harvard Square and Davis Square. Finals will be held at the Berklee Performance Center on Aug. 17. Events will include:

And that’s not all. NPS isn’t just a tournament; it’s also a festival of the written word. There will be a series of side events all week, including:

And that’s not the half of it. For the full schedule, and much, much more, visit nationalpoetryslam.com.

About the National Poetry Slam

The National Poetry Slam is the largest team poetry slam in the world and the definitive showcase for competitive performance poetry. Since 1990, teams of the best poets from around the country have come to compete for the national championship, performing individually or in “group pieces” to impress judges selected from the audience. The week-long festival also serves as a showcase and workshop meet-up, all celebrating the dynamic oral tradition slam has fostered. This year’s National Poetry Slam will be hosted in Boston, Cambridge and Somerville, Mass. from Aug. 13 to 17. For more information, visit http://nationalpoetryslam.com. Follow NPS2013 on Twitter @nationalslam or on Facebook at http://www.facebook.com/NationalPoetrySlam.