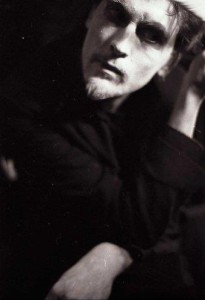 Self-understandingly, Louis Barabbas. I’ve never had so many performances ruined by the sheer hilarity of high-quality grim whimsy and doom-puns. Hilarious. Silent studio atmosphere or not, you too would laugh:

“I want to be absolved of all my intentions and
have my decent deeds undone
Because the only way I’ll get to heaven now
Is as somebody’s plus-one”…
www.louisbarabbas.com

Mika Doo brought a sultry and deliciously spooky gloom, up from London, to cook first rate risotto between vocal takes. I’ve a tendency to ask performers, what they want to make people feel like, with their work. I’m paraphrasing when I quote Mika: “Introspective… and sexy”
www.myspace.com/mikabajinski

And on Friday, we had Anthony. Anthony is supported by an organistion called Ordinary Lifestyles. He loves 50′s Rock n Roll. He loves to sing. He came for the large-diaphragm mic, my teddy-boy jacket, and the photo of him, that he shows to girls, wherever he goes, whatever the subject of conversation.

But this week, I’ve been on a march. The sense that you’re simply going along with something bigger than you, and are thus less responsible yet more powerful, combines curiously with the notion that you’re finally expressing your own personal feelings, on a matters rarely raised. But when a known public figure walks by, beyond a yellow line of straight men, and you join in a glorious chorus of noise, the ‘oo’ sound of ‘boo’ is surely the most flavoursome of vowels, yes it is.

Some very enjoyable public speech, on the green, in front of the council office, where, a few days ago, I’d queued to register for poll tax.
For instance – “If you fight, in life, you’re never guaranteed to win. If you never fight, you lose every time” – Mark Serwotka

And, some poets, I chanced upon that afternoon: Tony Walsh, Sally Jenkinson and Ben Mellor.

There were more, too. Why do they keep all the poets at marches?

About the Author
Alabaster DePlume

“You know when you’re ugly You don’t always know you’re stupid” Alone, Alabaster will use his speech, song and behaviour to hold a room in moments of beautiful and bizarre clarity. He has been described as “Harrowingly funny.” When accompanied, he appears with John Ellis (Kirsty Almeida), Ellis Davies (Honeyfeet), Paddy Steer (Homelife), Hannah Miller (Moulettes) and Jessica Macdonald (Pepino), and delivers a score, song and theatrical poetry performance, of which one audience member said, “I had to keep laughing, or I think my heart would’ve exploded.” He works with Debt Records in his hometown Manchester, has toured Germany and France, and performs around the UK in festivals, bars and concert halls such as Band on the Wall in Manchester. In May 2012 he released a debut LP, that was the focus of two years devotion, that crosses disciplines and artforms, and that has been hailed as a rare, unique and indeed “great” piece of work by those who have been exposed to it. Alabaster is also accompanist for Liz Green and Honeyfeet, on saxophone.