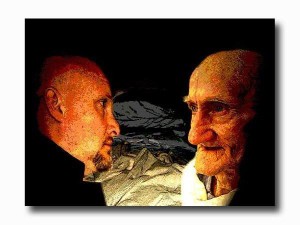 Only three things were known to be certainties by me and the tight knit group of oddball, overly intelligent, under achievers I called friends on that Friday, June 2nd, 1978.

The first being that Sony had just released the coolest thing to hit the planet earth called the Walkman.  Second, as of 7:30 PM we would be given the key to freedom from the gates of Hell in the form of a High School diploma.  The third and overall most convincing certainty of all, that this day would mark the starting point in my pursuit of what undoubtedly would become a promising career as an author and columnist.

As I stepped out of my car into the parking lot of the Rocky Mountain Convalescence Center on that cold, snowy, January evening in 2006, something had gone terribly wrong with all the certainties of that warm June day twenty eight years earlier.

Nothing had been going right for me the entire fifteen days of the New Year.  I hated the dead end copper mining job I had dedicated 26 years of my life to, resentful of the fact that it paid just enough to keep my uneducated testicles tightly held in its iron grip.

I hated the fact that once again I had to spend an entire evening visiting my semi-conscious Mother-in-law, Chloe, in this God forsaken convalescence home she found herself in after taking a swan dive that would have earned her a 10 from the most critical of judges, off of her icy porch-steps onto the concrete sidewalk below, all this in an effort to retrieve a Newspaper for her lazy, parasitic, alcoholic, good-for-nothing nephew whom she refused to throw out of her house.

Above all else I hated the fact that the crunching sound coming from my back pocket as my ass made its third bounce off that frozen parking lot asphalt that night, was without a doubt, my most highly treasured Christmas Present, my Apple Mp3 player, the coolest thing to hit the planet earth.

With my arm around my wife to help bare the weight load of the injured right half of my body, I limped down the sanitized hallway of the Convalescence Center enjoying the many aromatic aromas such establishments have to offer.

Upon reaching my mother-in-laws room, we found her engaged in a heated, all be it one-sided conversation, with someone living in a time period which predated my wife and I.  Another fascinating night watching Chloe argue with ghosts from her past I thought to myself ,as I sat down and prepared to referee this debate before it grew out of hand.

After a while the ghosts from Chloe’s past must have given in to her stubbornness and went back to whatever year they belonged, leaving Chloe to fall into a deep, nasally, and sinus impaired sleep of grunts, snorts and an occasional oink.

Already my wife Teresa had emerged herself in a Lifetime Channel made for TV melodrama, about a dysfunctional white family that adopts a black baby from a shady Hispanic adoption agency, and then later has to defend their legal paternal rights by hiring a gay Asian lawyer whose sociopathic lover turns out to be the brother of the babies’ biological mother.

Carefully calculating my options, I reduced my choices of entertaining myself the rest of the night down to three.  One; become totally entranced watching the upper plate of Chloe’s dentures rhythmically slide in and out of her mouth in harmony with her deep breaths of grunts and snorts.  Two; double up on my Prozac and engross myself in this nail biting; Lifetime drama.  Or three; walk the halls of this warehouse of the near dead and dying in search of new tantalizing aromas.

Being a life-long victim of Attention Deficit Disorder, I chose the latter.

I had only been walking a short time when I heard a faint, raspy voice calling out to me.  Just then a portly, ugly old nurse whom uncannily resembled Ernest Borgnine in a wig, stopped at the door from which the voice had called.

“What can I do for you Robert?” the nurse asked.

“Not you for God’s sake!  The Boy!  The Boy!” the raspy voice answered with much greater volume.

The ugly nurse turned, smiled at me and shrugged her shoulders.  “I guess he wants you.”

It had been an awful long time since anyone had referred to me as “The Boy” which amused me.  Without much hesitation I walked toward the raspy voice’s room.  Just before I entered Nurse Borgnine put her large, wrinkled hand on my shoulder and whispered in my ear.

“Don’t pay much mind to old Robert; he ain’t got all his senses”

I looked at her puzzled.

“He’s suffering from Alzheimer’s.   Don’t know where he is half the time.”   She said shaking her head.  “But the poor old fool is lonely.   He don’t have any family to speak of,” A genuine look of concern shown through her ugly face.  “Wouldn’t matter much though,” she chuckled.  “He wouldn’t know who they were if he did.”  With that Nurse Borgnine turned and disappeared down the Hall, leaving me alone in the dimly lit room, with the raspy voice.

“Get over here Boy,” the raspy voice called.

Walking toward the reclined hospital bed, I struggled to adjust my eyes to the sole light bulb burning above the head of the bed.  What I could make out was a skeleton of a man sitting on the edge of the bed in boxer shorts, his pajama bottoms draped across his legs which dangled a good six inches off the floor.  One slipper had fallen off his foot revealing thick yellow toenails, which hadn’t been clipped in months.

“Sit down” the old man said, pointing to a chair directly in front of him.

Sitting in the chair I extended my hand to the old man.  “How are you sir, my name is Lattie Odell.”

“Lattie Odell, you Irish?”  The old man demanded rather than asked.

“My Grandparents were from Scotland.”   I said, still holding my hand out without a responding gesture.

“Socially,” the old man chuckled “Yes, I know how an Irishman drinks socially.”

“Yeah, and damn proud of it too it seems.”

“Was there something you needed help with?”  I asked, anxious now to help the old man with whatever he needed and get the Hell out of there.

“What do you make of these?” the old man asked as he tossed his pajama bottoms at me.

Dragging them from off the top of my head where they had so skillfully landed, I wadded the damp flannel pants up in my hands.  “Did you spill something on them?”  I asked, not quite sure what this crazy old man expected me of me.

“Christ no, I didn’t spill something on them!” the old man shouted, “I think I pissed them.”

“Oh Shit!” I shouted tossing the urine soaked ball of flannel aside.

“You know when the last time was that I pissed my pants, Boy?” the old man asked, paying no mind to my dramatic reaction to his rather startling announcement.

“No sir I don’t know when the last time was that you pissed your pants, and I’m really not interested in finding out!”  I shouted as I sprung from the chair and prepared to walk out of this disgusting old man’s room.

“July 9th, 1942, in the gunner seat of a B-17 bomber, flying over Hamburg Germany” the old man said somberly, as if he hadn’t heard a word of my scolding.  “See any significance in that?” he asked as his raspy voice cracked with emotion.

“Last time you were afraid of dying?”  I asked quietly, choking back and swallowing my indignant attitude.

The old man just shook his head and stared down at his toenails, as a single tear rolled off of his cheek then disappeared into the dimly lit room.

4 Comments so far. Feel free to join this conversation.